Pugmire Ford Llc is pleased to be currently offering this 2018 Ford Explorer XLT with 58,735mi. This SUV is a great example of beauty and brawn with classic styling and a workhorse power plant. Where do you want to go today? With 4WD, you can choose to drive virtually anywhere and on terrain 2WD vehicles can't handle. The Explorer XLT has been lightly driven and there is little to no wear and tear on this vehicle. The care taken on this gently used vehicle is reflective of the 58,735mi put on this Ford. The quintessential Ford -- This Ford Explorer XLT speaks volumes about its owner, about uncompromising individuality, a passion for driving and standards far above the ordinary. Contact us at 770-832-2457 with any questions. We're always happy to help!

Model Overview
The Explorer is offered in base, XLT, Limited, Sport and Platinum models, but no matter the model, it comes with three well-designed rows of seating and room for up to seven (the second row comes with two bucket seats for adults). While the third row is kid-sized, it's easier to fold than those on just about any other model, thanks to the simple, single-button power-folding system. Parents will also note that LATCH fasteners for child seats are included in the second-row outboard positions. Both the second and third rows flip forward, giving a cavernous 81 cubic-feet of cargo space.

The 4-wheel-drive system in the Explorer is available with both engines, and it is designed with the urban driving done by most Explorer owners in mind. The system includes a Terrain Management system that cleverly recalibrates itself for snow, sand or mud when needed. With 4-wheel drive, there's also Hill Descent Control, to help maintain composure on steep, slippery slopes.

MyFord Touch combines a host of vehicle, information and entertainment functions in an interface that appears a bit like that of iPads or other tablet computers. The system works together with Ford's Sync interface to interact seamlessly -- and with voice commands -- with media players, smartphones and music on USB sticks.

Getting financed with us is fast and fun. Whether you’ve always enjoyed a sterling credit history, are currently working on improving your credit score even more, or this is your first time buying a car, you can count on the friendly experts at Pugmire Ford to make the whole process transparent and easy to understand. To learn more and get the ball rolling on the right loan for your unique financial situation, call (770) 382-5780 or apply online now.

What is the financing process like at Pugmire Ford?

Easy and relaxed. Our primary goal is your total satisfaction, so we provide you with as much time and expert insight as you need to properly consider all of your loan options. This commitment to friendly, honest, and fair service is truly a breath of fresh air and ensures that you drive away happy, satisfied, and behind the wheel of the vehicle you've always wanted.

What are the steps in the financing process at Pugmire Ford?

Great question. Securing a competitive loan from Pugmire Ford takes only three easy steps. First up is to either apply online for pre-approval via our quick and convenient online credit application or call (770) 382-5780. From here, one of our financing experts will connect with you to go over the details of your loan offers and ensure that you have everything you need to make a smart and informed decision.

After reviewing your proposed loan terms and consulting with our financial advisors and your trusted personal confidants (friends, family members, etc.), there is only one step left: Finalizing the perfect loan for you via a simple and respectful process. By following these three short steps, you can make the most of the best loan experience here in Cartersville.

What is involved in securing an auto loan in Cartersville GA?

The answer to this question includes a variety of factors, such as:

People from all around Cartersville come to purchase a clean car, truck, or SUV from our used car lot each and every day. Most loans prepared by our team are entirely unique, so the factors that will shape your bank loan will depend on your specific situation, desires, and needs.

Our expert financial professionals are happy to find and present lots of great offers to ensure that you are in complete control and that you are receiving the best deal possible on the loan you need. Our customers make great and informed decisions based on all of their available options thanks to a perfectly transparent process that we take seriously.

Who can I call at Pugmire Ford to get the financing process started?

Any of our amazing specialists will be more than happy to help you get the ball rolling on your dream car. All you have to do is dial (770) 382-5780 when you have a few free moments and you'll soon see that getting approved for a car loan at Pugmire Ford is quick, easy, and convenient. 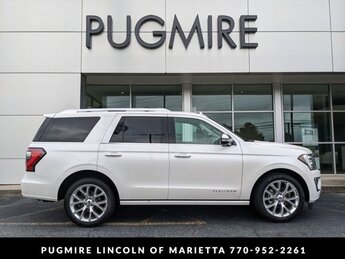 2018 Ford Expedition Platinum
White
$48,995
*Price and payments shown are plus tax, tag, title, and Georgia WRA. Price and payments shown include all factory rebates and dealer discounts applicable to the general public. Price subject to change. Art for illustration purposes only. Must choose from dealer stock to receive prices shown. Must bring a copy of this in order to receive advertised internet price. Payments shown are with APPROVED CREDIT.
Close
Close